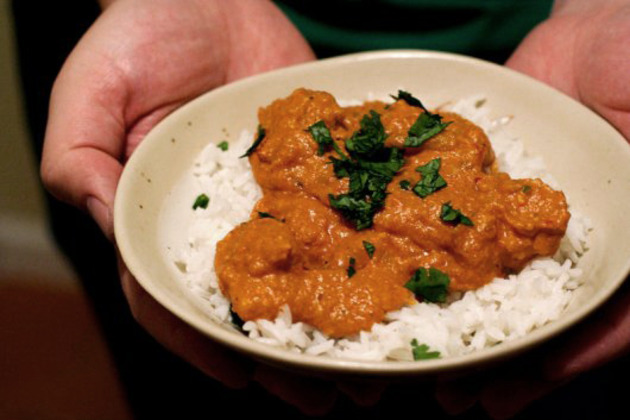 Photo by Quite Curious

I don’t have a grill, so I sauteed the marinated chicken in a pan, and microwaved a potato to add into the sauce (I would have baked both if had the time. Let’s be realistic here.) Even if I did have a grill, I probably wouldn’t use it – it’s simpler and easier to cook in the same pan you’re going to cook the sauce in, and the chicken is more tender. Trust me, it turns out just as good!

Microwave a potato until it’s soft, about 3 minutes (although this really depends on your microwave). Chop the potato into bit-sized pieces. Grind the nuts in a food processor until it turns into a thick paste. Set aside.

Melt butter in a large heavy skillet over medium heat. Saute garlic and jalapeno for 1 minute. Add marinated chicken to the pan, browning on both sides. Season with 2 teaspoons of cumin and paprika.

Stir in tomato sauce, cream and brown sugar. Add potato chunks and nut paste into the pan.Simmer on low heat until sauce thickens, about 20 minutes. Add peas. Transfer to a serving platter, and garnish with fresh cilantro.

Serve with rice and/or naan bread.

Flag recipe as inappropriate
Recipe posted by Quite Curious on Cookooree.com, a platform for sharing recipes. Post your recipes and share them with friends.