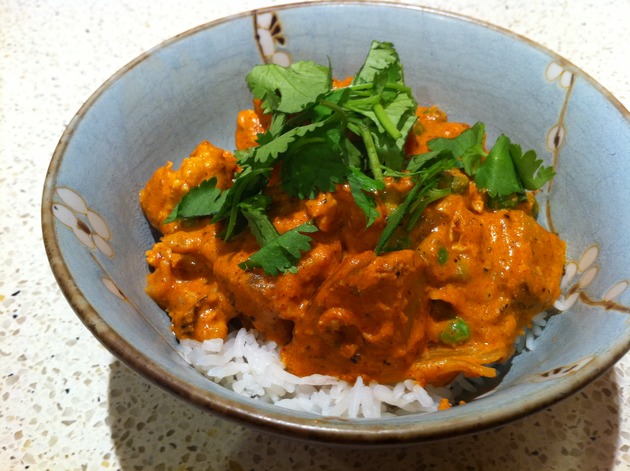 I made the original recipe, which was pretty delicious, but way too spicy for my kids to eat. Sadly, I ended up eating this alone. For this more kid-friendly version, I reduced the heat, including the cumin. I also reduced the amount of chicken and added in veggies, notably cauliflower.

This recipe feels really involved when you're making it, mainly because there are so many spices. It's worth it, though. Now I just have to learn to make naan...

Combine half the mixture with the yogurt. Add the chicken and mix until thoroughly covered. Set aside to marinate for an hour or so.

In a large pan, heat the oil over medium-high heat. In batches, brown the chicken on all sides and set aside.

In the same pan, melt the butter. Saute the onion and the rest of the spice paste. Cook until the onions are soft.

Stir in the tomatoes and simmer for 20 minutes until it becomes dark and thick. Add the cream. Simmer for another 10 minutes. If you like it smooth, now is the time to puree it.

Add the chicken, including any drippings and any leftover yogurt marinade. Mix well.

Transfer to a serving platter, and garnish with fresh cilantro.

Serve with rice or naan.