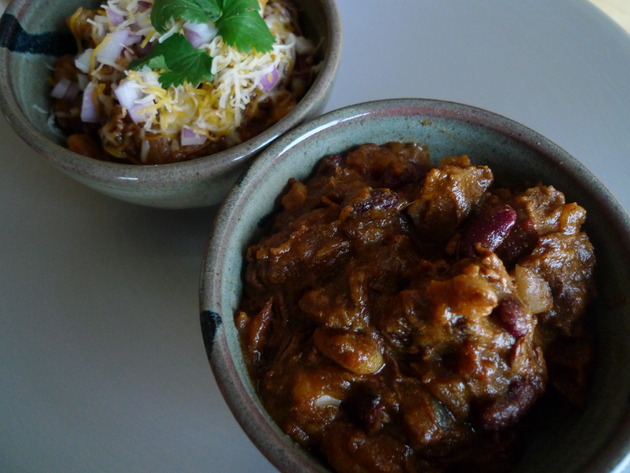 This was my first attempt at chili con carne, and it was pretty good. I love all the vegetables in vegetarian chili and next time would try adding veggies to the mix and reducing the amount of beef by half. I've also read about people using coffee, dark chocolate, and cocoa in their chili. Perhaps those options need exploring... Oh, and next time I would use a way better cut of meat.

In a large skillet, cook the bacon on medium high heat until almost crisp. Remove bacon, cut into bit-size pieces, and add to the slow cooker.

In the same pan, brown the beef cubes on all sides in batches, taking care not to crowd the beef. Remove beef and add to the slow cooker.

In the same pan, add 1 tbsp olive oil. Roughly chop the onions and garlic. Add to pan. Stir to cook and also deglaze the pan. (You want all the fond transferred from the pan to the onions.) When soft, remove and add to the slow cooker.

In a medium bowl, combine chili powder, cumin, oregano, coriander seeds, and brown sugar. Add the juice of half a lime. Remove the seeds of the chipotle pepper, dice it, and add to the spices. Mix into a paste, and then add it to the slow cooker.

Break up the whole tomatoes with your fingers or a pair of kitchen shears (like I do), and add it to the slow cooker.

Pour in the beer. Stir everything. Set the slow cooker to low and cook for 7 hours or until the meat becomes tender.

30 minutes before serving, drain the beans and add to the slow cooker. Stir in just enough masa harina to thicken to your liking.