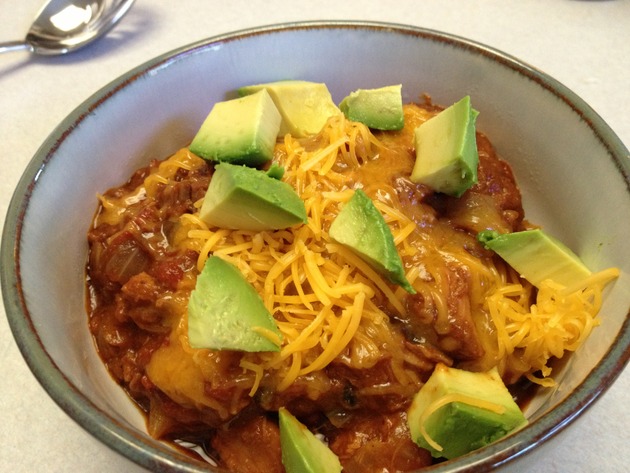 So I made Suzhou Inspired Slow Cooked Pulled Pork and discovered 8lb of pork shoulder if a lot of meat for a family of 4. So, to bring a little flavor variety to our lives, I decided to take Joanie's chili recipe and replace her chuck with my [already cooked] pulled pork.

The end result was great, especially when topped with cheddar awnd avocado. :o)

Even better, because the meat was already cooked, I got it all done in about an hour.

In a large dutch oven, cook the bacon on medium high heat until almost crisp. Remove bacon, cut into bit-size pieces, and set aside.

Using the bacon drippings in the pot, cook the onion and garlic to deglaze the pot. (You want all the fond transferred from the pot to the onions.) You want the onions to be soft and translucent.

In a medium bowl, combine chili powder, cumin, oregano, coriander seeds, and brown sugar. Add the juice of half a lime and adobo sauce. Remove the seeds of the chipotle pepper, dice it, and add to the spices. Mix into a paste, and then add it to the pot along with the meat.

Break up the whole tomatoes with your fingers or a pair of kitchen shears (like I do), and add it to the pot.

Drain the beans and add to the pot along with the beer. Stir in just enough masa harina to thicken to your liking.