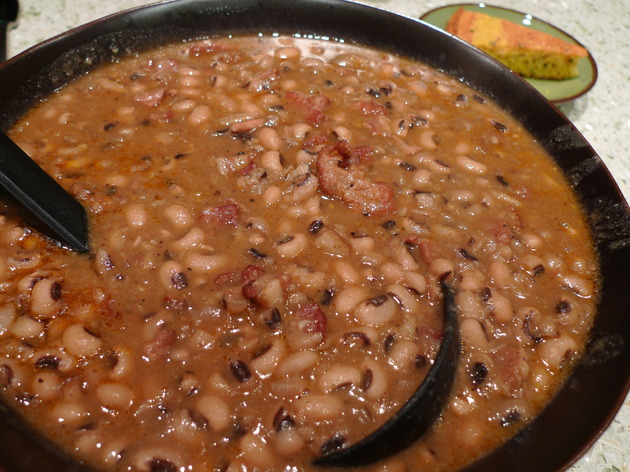 I only recently found out that black-eyed peas are good luck New Year's food. This year I decided to serve it on New Year's Eve. I wasn't sure what to expect since I've never eaten black-eyed peas, but I found a great recipe in the absolutely essential cookbook Real Cajun by Donald Link. It was delicious.

Rinse and soak the peas.

Heat oil in a large pot over medium heat. Add pork and let brown on all sides, stirring occasionally. (Do not scrap the meat from the pan. When it's done searing, it will release itself.)

Add water and bay leaves. Bring to a boil, and then reduce the heat. Cover and let simmer for 30 minutes, stirring occasionally.

Drain the peas and add them to the pot. Let simmer uncovered, stirring occasionally. Cook for another 60 minutes or until the peas are tender.

Smash some beans to make it thicker and creamier.

Serve warm over rice or cornbread.