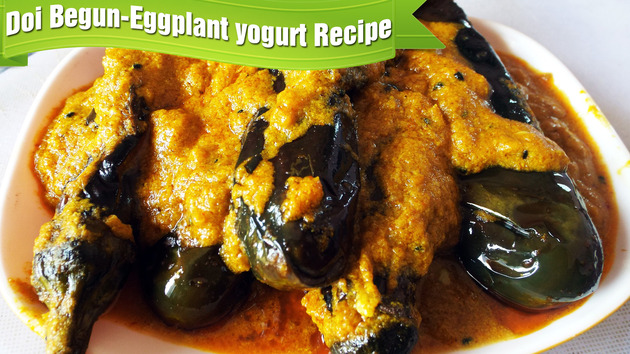 First wash the Eggplants in cool water. Now take a knife and remove the flower part from the Eggplant one by one keeping the stalk intact and cut one side horizontally from the middle of the Eggplants/ Brinjal.

Now mix half of all masala (Graram Masala, Chili powder, Salt, Turmeric powder, Cumin powder, Coriander powder) and pour inside the Eggplant one by one and greasing it properly.

Heat the pan with oil and add Eggplant one by one. Fry those Eggplants until it become soft and turn brownish yellow. Now take bowl and remove from heat.

Now add Cloves, Cardamom and Cinnamon in the pan. Fry them for smell purpose. Add Nigella seed as per your taste.

Add onion paste and stir it well. Fry until get a brownish color.

Add Turmeric powder, Chili powder and Ginger garlic paste. Mix it properly and fry them well.
Add some spicy before we prepared.

Add yogurt and mix it well. Now add salt as per your taste.
Keep it for few minutes for fry. Be sure, cook for about 3 minutes in low flame.

You can add some water for more gravy.

Add fried brinjal/ Eggplants one by one in the gravy. Stir it gently for mixing the gravy with brinjal.

Flag recipe as inappropriate
Recipe posted by totana on Cookooree.com, a platform for sharing recipes. Post your recipes and share them with friends.