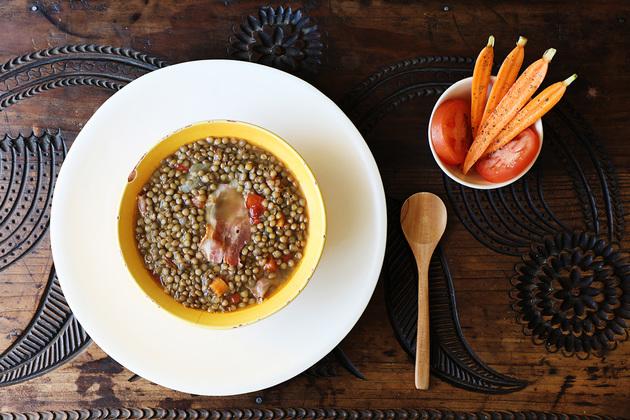 Preparing the Lentils
Soak the lentils in water for 30 minutes then drain the water from the lentils and rinse under cold water.
Place the lentils in a large pot. Add the 2 quarts of chicken broth and 1/2 of the white onion.
On high bring to a boil. When the lentils have come to a boil reduce the heat to medium. Add 1 tsp. salt. Remove any foam that forms.
Preparing the Bacon
Cut the strips of bacon in half.
In a medium hot pan, cook the bacon until it has started to brown on both sides.

Add the browned bacon to the lentils and continue cooking over medium heat. Remove the half onion from the lentils and discard.
Preparing the Vegetables
Peel and chop the carrots into 1/4 in. pieces.
Chop the onion into 1/4 in. pieces.
Remove the seeds and chop the tomatoes into 1/4 in. pieces.
Preheat 3 tbsps. olive oil to medium hot. Add the onion first and cook for 3 minutes until the onions just start to become translucent.
Add the carrots and cook for 3 more minutes.
Add the tomatoes and cook until the tomatoes are just starting to break apart.
Add the onion, carrot, tomato mixture and the sprigs of cilantro to the lentils and stir.
Finishing the Soup
Cook your lentils for 10 more minutes. Add water one cup at a time if the soup is too thick. Taste and add salt if needed before serving.