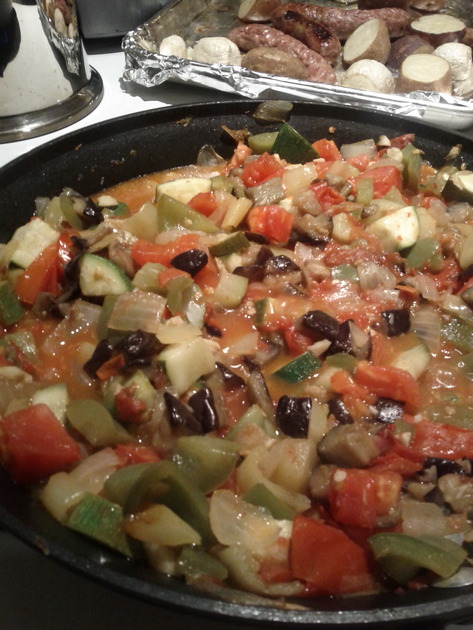 We have signed up for a Community Supported Agriculture box from Eatwell Farms. So each week we get a bunch of vegetables that we have to figure out what to do with. This week we had eggplant, which made @hulagun think of ratatouille, and my Chez Panisse Vegetables cookbook had a recipe for it. I followed it pretty much: but they wanted three onions and I only had one, and 5 tomatoes and I only had 4; you know, etcetera. Below, I name the varietal of vegetable that Eatwell Farms gives us just for reference. And bragging.

Cut the eggplant into 1/2" cubes. Salt liberally and let drain in a colander.

Cut the onions, zucchini, peppers, and tomatoes into 1/2" cubes but keep each separate (I put them into individual bowls). Smash the garlic and chop it up, it doesn't have to be finely minced.

Squeeze the eggplant in fistfuls to get as much liquid as you can out.

In a large saucepan, heat olive oil and fry the eggplant till golden. Then remove from pan and reserve.

Add more olive oil and sautee the onions. When they are translucent-ish add the garlic, hot pepper flakes, and the basil.

Then, toss in the eggplant and now cook all together for 15 to 25 minutes. Remove the basil and serve! If you feel like it drizzle more olive oil, add finely chopped garlic and a few basil leaves as a garnish.

Flag recipe as inappropriate
Recipe posted by LizDunn on Cookooree.com, a platform for sharing recipes. Post your recipes and share them with friends.