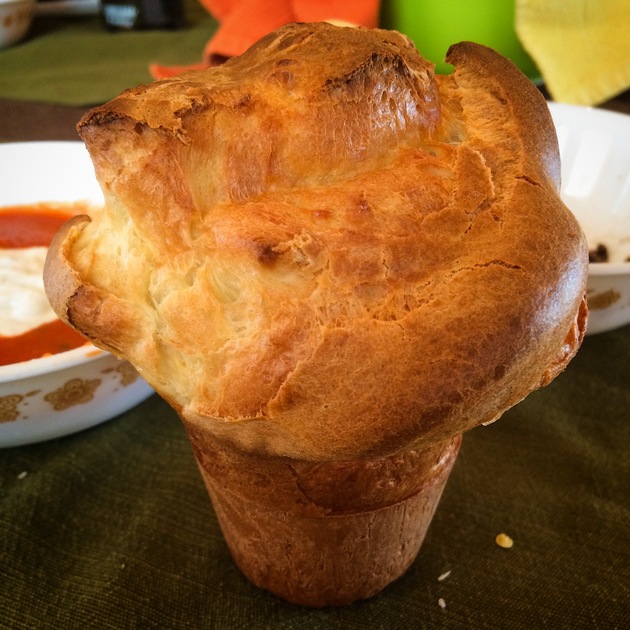 I first fell in love with making popovers thanks to greacen's excellent popover recipe right here on Cookooree. This one is a little different, using a blender... it might be for you if you don't like doing dishes. It's adapted, with some minor tweaks, from Alton Brown's recipe. Next time I might try a hybrid between the two recipes.

Preheat oven to 400º. Don't start mixing things until the oven is ready.

Grease a 6-cup popover pan* with the 1 tsp of melted butter.

Place all of the ingredients into a food processor or blender and process for 30 seconds**. Immediately divide the batter evenly between the cups of the popover pan, each should be about 1/3 to 1/2 full.

Bake on the middle rack of the oven for 35-40 minutes, until deep golden brown. As soon as you can handle them, remove each popover from the pan and pierce the top with a knife to allow steam to escape***.

Keep popovers warm in a bread basket until serving. Leftovers can be stored in a ziploc bag, and reheated in the oven for a few minutes.

* If you don't have a popover pan, you can use a muffin pan, but you'll get more va-va-voom out of a popover pan. Once you nail this recipe, it'll be a staple, and the pan will be worth it.

** You'll be tempted to just use a whisk, but I haven't had success with this recipe that way. Use a blender.

*** This is the big secret to big, beautiful popovers—if you don't poke a hole to let the steam out, they'll collapse and shrivel and you'll be so sad.

Flag recipe as inappropriate
Recipe posted by Humuhumu on Cookooree.com, a platform for sharing recipes. Post your recipes and share them with friends.