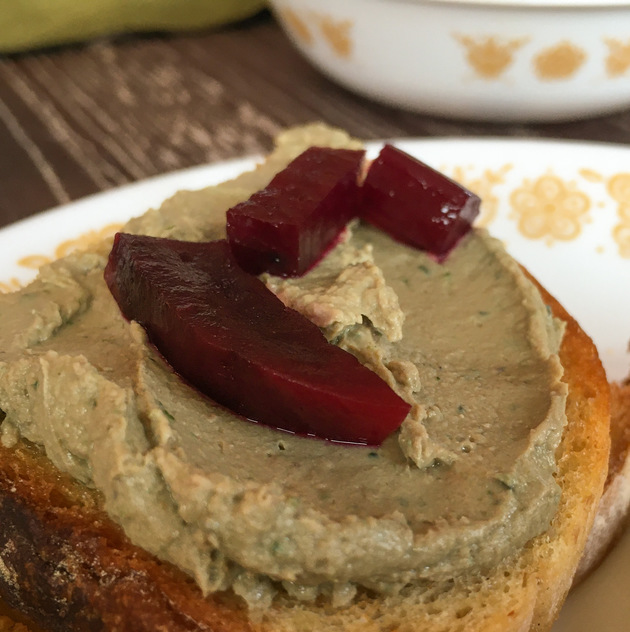 This recipe is based off of an excellent recipe for pickled rhubarb from Tom Douglas' 2003 cookbook Tom's Big Dinners, to be paired with pâté. Rhubarb has such a short season, and breaks apart after freezing, so I adapted it into to use beets and beet stems instead. I can confirm these freeze and thaw perfectly.

Beets stain—wear gloves, and don't wear clothes you care about.

Wash the beets thoroughly. Cut the stems off leaving about an inch on the tops of the beets, and set aside.

Put the beets in a aluminum foil pouch on a baking sheet and roast at 350º for 25 minutes, then turn the pouch over and roast for another 25 minutes. Check for tenderness with a sharp knife, keep roasting if they aren't done. Remove from the oven and let them cool for handling.

Cut the tops and tips off of the beets. Under running water, scrape the skin off with a spoon.

Cut the beets however you want them. Slices are common, but I like little pieces. Put them in a large, stain-proof, heat-proof, non-reactive bowl.

Remove any leaves from the beet stems, and cut them into pieces. Add them to the bowl.

In a saucepan, combine the vinegars, sugars, jalapeño, ginger, and spices. Bring to a boil over medium-high heat, and let it boil for at least three minutes. Immediately pour the hot syrup over the beets.

Allow the beets to cool to room temperature, then cover the bowl and move it to the refrigerator. Let the beets sit for a few days.

Use within a few weeks, or freeze in the brine.

Flag recipe as inappropriate
Recipe posted by Humuhumu on Cookooree.com, a platform for sharing recipes. Post your recipes and share them with friends.