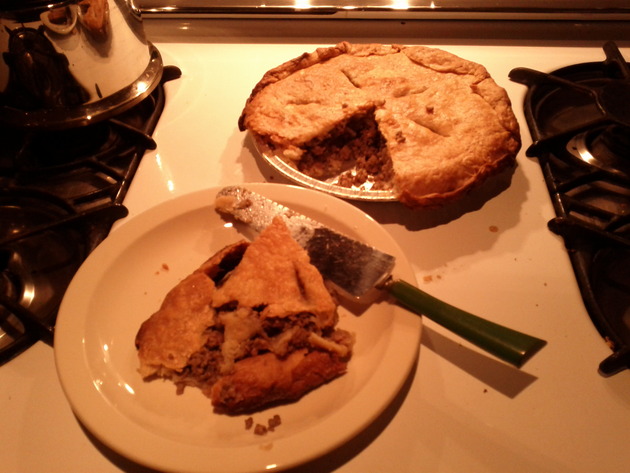 When I was a small child, a favorite treat at our local drive-in was a small deep fried meat pie called a Lazy Dazy. Served hot with mustard, it was a pastry shell filled with a spiced ground meat. They were delicious. We eventually moved away and Lazy Dazies became a distant memory. Years later, my new step-grandmother, who was French Canadian, served me her tortiere. Here was the same flaky pastry crust and aromatic, savory filling I remembered, but in a pie! Nowadays, I make one of these myself now and again, and relive the Lazy Dazy. Because excellent frozen pie crust is available at better grocery stores, I use that. The filling is my adaptation of my step-grandmother's recipe.

Brown the meat in a deep pan on your stove top, with the garlic, celery, onions, salt and pepper. Break any meat lumps down as small as possible. Spoon off some of the grease and discard, but retain the juices.

While the meat mixture is simmering, begin thawing the frozen pie crust per the directions for a two crust pie (one for the bottom and one for the top). Line a round 9" pie pan with one crust, the other will be the top crust. Preheat your oven to 425º.

When meat mixture is hot and brown, stir in the spices. Add the bay leaf, and a splash of water if needed. Allow the meat mixture which should be wet to simmer for 10-15 minutes on low heat. Add water if necessary but don't let it get too wet. When the pie crust is ready, remove the bay leaf from the filling and stir in the potato mash, continuing to simmer until the mixture is about the thickness of oatmeal. Add more salt to taste.

Pour the filling in to the pie pan and lower pie crust. It should be enough to be pile higher in the center to form a mound. Lay the top crust neatly over the mound of filling. Pinch the edges all around to join the top crust to the lower crust tightly. Only trim extra crust if necessary. Using a sharp knife. cut some steam vents in the top crust. Brush the crust with the milk and egg yolk mixture. Bake the pie in the preheated oven for approximately 30-40 minutes.You want to fully cook the crust so it is golden and flaky, while also fully heating the filling. Depending on your oven you may want to cover the outer edge of the crust with aluminum foil part way through the baking process to keep the edges from burning.

hulagun
updated over 10 years ago
Follow
Flag recipe as inappropriate
Recipe posted by hulagun on Cookooree.com, a platform for sharing recipes. Post your recipes and share them with friends.