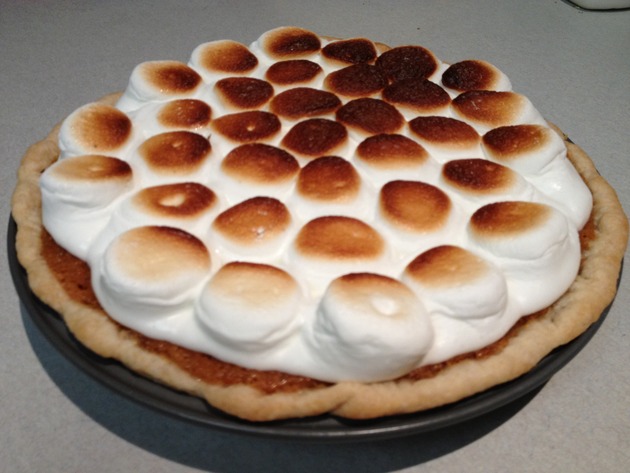 So on my second attempt of this recipe I made a couple of adjustments to address the moisture issue (without going the baking potato route). First, I whisked my filling with the hopes that it will hold together longer. Second, per a tip from America's Test Kitchen's Pumpkin Pie, I'm using a warm pie crust to get the cooking process started sooner.

Plus, I decided to kick it up a notch by adding the best complement to yams/sweet potatoes...marshmallow.

Set the mashed potatoes in a strainer and allow potatoes to drain any excess moisture.

Place potatoes in a bowl and then mix in spices and melted butter.

In a separate bowl, whisk eggs and cream. Then add sugar and vanilla.

Whisk the potatoes into the egg mixture then pour into the pie shell.

Bake for 40-60 minutes or until the top becomes firm.

Remove the pie from oven and add a layer of marshmallows on the top.

Place the pie in a broiler until the marshmallows are toasted, checking frequently to make sure your pie doesn't go up in flames.

Remove from broiler and allow the pie to cool on a rack. While the pie cools, the marshmallows will further melt from the residual heat.

Sweet Potato Pie
by car2ngrl
Flag recipe as inappropriate
Recipe posted by car2ngrl on Cookooree.com, a platform for sharing recipes. Post your recipes and share them with friends.