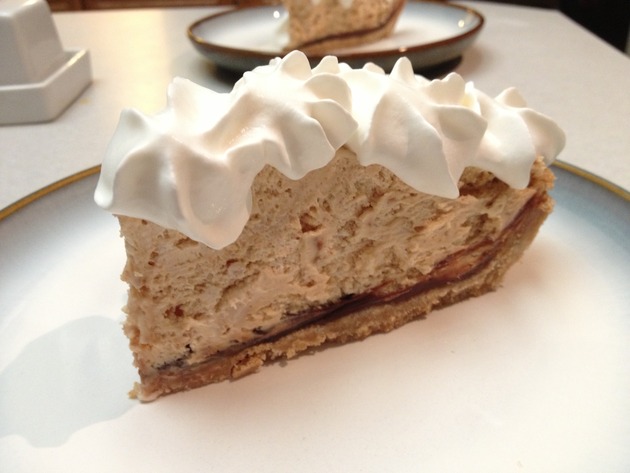 This recipe is based on ''Mrs. Salter's Peanut Butter Pie'' recipe from Paula Deen. Not sure who Mrs. Salter is but as with most Paula Deen recipes, this one is super easy and super delicious.

The filling wasn't super sweet -- maybe because I used real peanut butter and not what the stores are calling ''peanut butter spread'', which often has it's own sugar. Or with all the pies I've been making lately, my sugar sensors could also just be dull.

No worries! I just added a layer of fudge of the bottom the pie pan to give it another layer of YUM! A drizzle of chocolate sauce or dollop of whipped cream when serving couldn't hurt either.

In a prepared graham cracker crust, spread the fudge along the bottom. (An offset spatula comes in really handy here. Think of this like frosting a cake. You want to avoid picking up crumbs so keep your blade at an angle and don't pull directly up.)

Set crust aside and prepare the whipped cream.

Whip the cream with the sugar.

Set aside and prepare the rest of the filling.

Mix the remaining ingredients in a mixer.

Fold in the whipped cream.

Scoop into pie crust and spread into a mound.

Chill for at least two hours before serving with whipped cream or chocolate sauce.