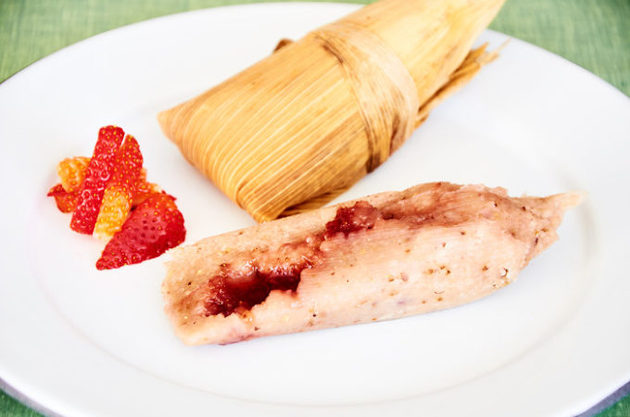 To prepare the corn husks: Soak the corn husks in hot water in a large pot or in your kitchen sink. Place a plate over them to weigh them down so they are completely submerged. Let them soak for at least an hour.
To make the filling: Blend the 2 cups of almond milk and 1 cup of the strawberries until smooth.
To make the dough: Beat the butter and sugar on medium-high speed with an electric mixer until the butter has doubled in size and is nice and fluffy (about 3 minutes). Add the baking powder and salt. Beat for 1 minute to incorporate into the butter.
Add half of the masa harina. Then add the strawberry almond milk. After they are completely incorporated, add the “other half of the masa harina and the water. Add the remaining cup of chopped strawberries and beat at low speed until thoroughly mixed. It should have the consistency of a thick cake batter. If necessary, add more water until you reach that consistency.
For lighter and fluffier tamales, let the dough rest for an hour in the refrigerator. Remove the dough from the fridge and beat it again, adding enough liquid to get it to the consistency it had before.
Remove the corn husks from the water and set on paper towels. Reserve the largest husks to wrap the tamales and the small ones to line the steamer.
To set up your steamer: Fill the bottom with water making sure the water is not touching the steamer rack. Line the rack and sides of the steamer pot with corn husks. Set aside.
Place the tamal in the steamer vertically, leaning against the side of the steamer, with the open end on top. Repeat this process until you run out of dough and all the tamales are in the steamer. Cover them with a layer of corn husks. If the steamer is not full, fill the empty spaces with more corn husks. Cover the pot and bring the water to a boil. Turn heat down to medium and cook for 40 minutes. Check the tamales. When they separate easily from the corn husks, it means they are done. If they are not done, steam for 10 more minutes and check again.
Remove steamer from the heat and let sit covered for 10 minutes. Uncover and let cool for at least an hour. Don’t be alarmed if the tamales seem really soft. As they cool, they will firm up.