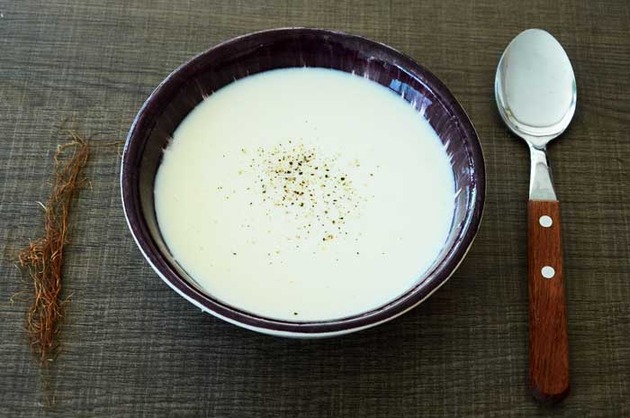 Corn is the flavor of Mexico and this cream of corn soup highlights the earthy corn flavor. This spectacular soup which transports you to Mexico with each bowl.

Over low heat, fry the corn kernals in 2 tablspoons of butter for 5 minutes.
Chop the onions and garlic and add them to the corn and cook for 5 more minutes.
Add 2 cups of water and black pepper to the pan and simmer for 20 minutes.
Blend the sauteed onions, garlic and corn and cooking liquid with 2 cups of water until vry smooth, about 2 minutes.
Strain the mixture into a mixing bowl. Press firmly on the pulp with the back of a spoon to extract as much flavor as possible from the corn.
Allow the cream to come to room temperature and allow the blended corn base to cool for 10 minutes before adding to the cream.
In a large mixing bowl, add a few tablespoons of soup base into the cream and gently stir to incorporate.
Continue adding a few tablespoons of base at a time while continually stirring.
Once you have added all of the soup base add 2 cups of water and stir for 30 seconds to ensure that all of the soup base and water is incorporated into the cream and there are no lumps in the cream.
Warm 1 cup of chicken broth in a pot but don't bring the broth to a boil because if the broth is boiling the cream will clump when you pour the mixture into it. Slowly pour the soup base into the broth.
Very gently simmer the soup for about 20 minutes. Over this time the soup will thicken. Do not allow it come to a boil or the soup may clump.
Serve immediately.