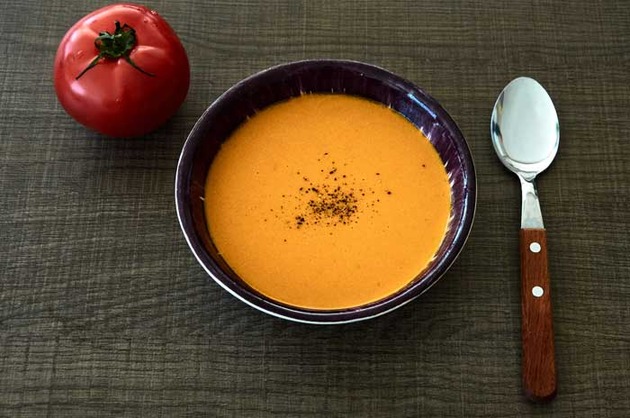 Roughly chop the tomatoes, onions and garlic and fry in 2 tablespoons of oil.
Cook until the onions and tomatoes are starting to brown.
Blend the tomatoes, onion and garlic with 2 cups of water.
Strain the blended tomato mixture pressing well on the pulp to extract maximum flavor.
Put the cream into a large mixing bowl. Add a few tablespoon of the pureed tomato base. Stir to blend base into the cream.
Add a few more tablespoons of soup base at a time and stir until all of the base has been incorporated into the cream. Now add 2 cups of room temperature water and stir for 30 seconds until the mixture is very smooth.
Gently warm 1 cup of chicken broth and then slowly pour in the tomato soup mixture. Stir well until the chicken broth is fully mixed in.
Bring the soup to a gentle simmer and then simmer for 20 minutes until the soup has thickened. Do not allow the soup to boil or the cream will start to clump.
If needed strain your soup to remove any lumps that may have formed.
Serve each bowl with a crack of black pepper.