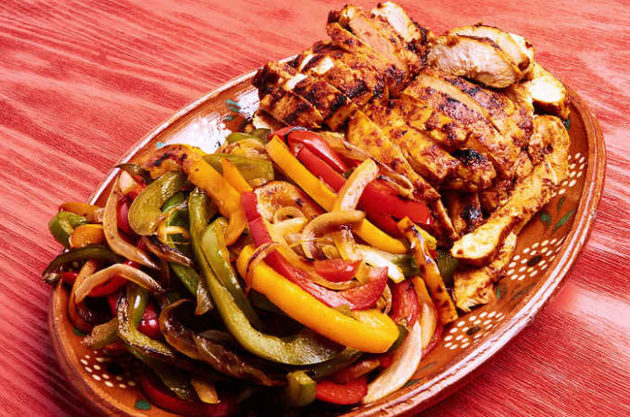 A little sweet, a little smoky and with just a hint of spice. Our flavor packed authentic chicken fajitas prepared with a guajillo chile adobo rub is the perfect dish for a weekend crowd. Three colors of bell peppers give it some visual pop.

PREPARING THE CHICKEN
Slice the Chicken so that it it a uniform ½″ thick.
Season both sides of the chicken breasts with salt.
Rub both side of the chicken breasts generously with the adobo.
Refrigerate the marinated chicken breast for 2 hours to allow the flavor to penetrate.
Remove the chicken from the refrigerator and allow to come to room temperature before cooking.
Preheat 4 tbsp. of cooking oil to medium hot in a wide skillet.
Cook the chicken until a nice crust has formed on both sides. Don't crowd the chicken in the skillet. It's best to cook it in 2 batches.
Once the chicken is cooked, remove it from the skillet and allow it to rest for 5 minutes.
Slice into even ¼" strips.
PREPARING THE VEGETABLES
Slice the onion and bell peppers into even ¼" strips.
Preheat a wide skillet to medium hot with 3 tbsp. of oil.
Add all of the sliced vegetable.
Cook until the vegetables are just starting to blacken and are just cooked through. Don't cook them until they are mushy. Cook them to "al dente."
Mix with a pinch of salt.
SERVING
Put the vegetables and chicken fajitas on a large serving platter. Serve with hot flour tortillas on the side.