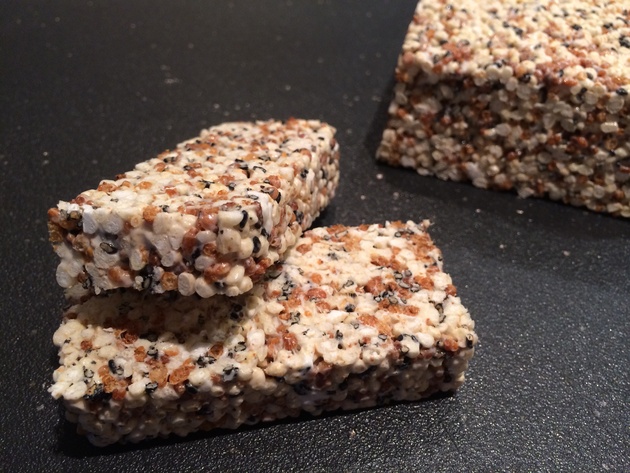 This recipe is a play on Rice Krispies® Treats (with a K!), but instead of using cereal, I use iri genmai, which is the roasted brown rice used to make Japanese tea. I added black sesame seeds to sweeten it a little, too. These things are tasty: nutty and not too sweet. I originally only used only iri genmai, and they were hearty. Really hearty. Like Grape Nuts hearty. But I just discovered puffed millet--100% millet and no added anything--and it was the lightness I needed to balance the roasted brown rice. These things are now perfect!

You can find iri genmai at Asian markets in the tea section. I bought my puffed millet online but you could probably find it in a hippy grocery store.

Use the butter to grease up an 8" baking pan.

Toss the rest of the butter in a large skillet over low heat. Once the butter is melted, add the marshmallows. Stir occasionally to help them melt.

Transfer to the baking pan. Lay a piece of wax paper on top, and then press down to flatten and even out the rice-marshmallow.

Set aside to fully cool.