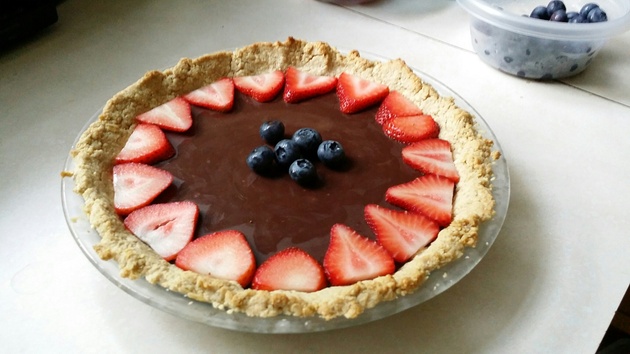 A friend, vegan, was leaving town for a new job and so declared CHALLENGE ACCEPTED and tried out a vegan dessert. And you know what, this pie is SO TASTY. Everyone kept talking about how great it was and everyone had more than one serving. Remember to chill the full-fat (not light) coconut milk in the fridge over night before following this recipe.

For the crust:
Preheat oven to 350⁰F and lightly grease a 9-inch pie dish with coconut oil.

Put almonds in a food processor and process until a fine crumb forms, the size of sand. Add the coconut oil, maple syrup, salt, and oat flour and process again until dough forms. Pulse in the rolled oats until the oats are finely chopped, but still have some texture to them. The dough should stick together when pressed between your fingers.

Dump the dough into a pie dish (greased with coconut oil). Starting from the middle, press the mixture firmly and evenly into the dish, moving outward and upward along the side of the pie dish. The harder you press the crumbs into the dish, the more it will hold together. Poke 5-6 fork holes into the bottom to let the air escape.

Bake pie crust, uncovered, at 350⁰F for 12-15 minutes, until lightly golden and fragrant. Remove from oven and set aside to cool on a rack for about 20 minutes.

For the filling:
Chill can of coconut milk in the fridge overnight so the cream can solidify. When ready, open the can and carefully scoop out the solid white coconut cream into a pot, discarding the water. Add chocolate and stir until combined. Heat over low-medium (chocolate burns easily so be careful) heat until most of the chocolate is melted. Remove from heat and stir in the optional sweetener, salt, and vanilla until smooth.

Assembly:
Pour chocolate filling into pie crust and smooth out. Place in the freezer, on an even surface, for a minimum of 2 hours, or until firm throughout. Add strawberry trim and serve with additional berries.

Allow pie to sit on the counter for 15-30 minutes before attempting to slice. The first piece is tricky to get out, but after that, it's cake (aka pie).

Flag recipe as inappropriate
Recipe posted by alchemisty on Cookooree.com, a platform for sharing recipes. Post your recipes and share them with friends.