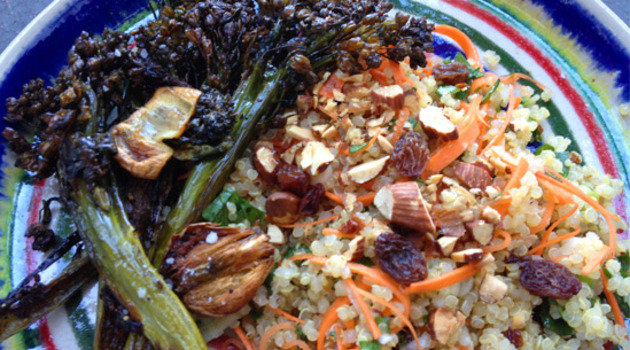 1. Preheat the oven to 450˚. On a large baking sheet, toss the broccoli rabe with the garlic and 3 tablespoons of the olive oil until evenly coated. Season with salt and pepper, then spread the broccoli rabe in a single layer on the baking sheet. (If necessary, divide the﻿broccoli rabe between two baking sheets.) Roast, stirring once, for 20 minutes or until charred and tender. Remove the broccoli rabe from the oven and set aside to cool slightly.
2. Meanwhile, bring the water to a boil in a medium saucepan. Add the quinoa and a generous pinch of salt. Reduce the heat to low, cover and cook until the quinoa has absorbed all the water, about 12 minutes. Remove the saucepan from the heat and set aside.

3. In a medium bowl, whisk the cumin with the remaining 2 tablespoons olive oil, the honey and the lime juice until combined. Using a spatula, fold in the quinoa, herbs, carrots, almonds and raisins. Season with salt and additional lime juice, if desired.

4. Divide the salad among four plates and add a pile of the broccoli rabe to each. Serve immediately or at room temperature.

purewow.com
Flag recipe as inappropriate
Recipe posted by Lyn on Cookooree.com, a platform for sharing recipes. Post your recipes and share them with friends.